With a wide-open empty building, Edward Shen turned to On Deck Sports to help design and outfit his new facility. At first discussion, the original plan was only to get turf from On Deck based on timing of the project. After discussing the project with his facility representative, Greg Bitsimis, he decided to explore netting options for the facility as well.

With a fast-approaching grand opening, time was of the essence. Together, Edward worked with Bitsimis to come up with a layout that suited their needs while also being conscious of the timing and budgetary restrictions they were working with. In the end, the decision was made to get materials from On Deck for a self-installation.

In total, it only took four short weeks to get from Edward’s initial conversation to the date all the materials he ordered for installation shipped out.

The original plan was to have a shell net running horizontally in the facility with turf underneath five cages. After a back and forth that included seven different proposed layout options, it was decided to run the cages vertically with the possibility to having a maximum of four full length hitting lanes.

After originally debating on going with thicker netting, Edward chose #42-gauge netting based upon On Deck’s recommendation to help save on costs while not sacrificing much on durability. #42 netting was both a cost-effective option, while still being a step up from the standard #36-gauge.

For turf, Edward was able to work through the options with Bitsimis. From looking into the highest quality options available to exploring the possibility of adding an inlaid logo in the turf, all options were discussed. After reviewing samples of each option On Deck had to offer, Edward decided on black GT48 turf based on the soft feel and enhanced aesthetic it gave his facility.

Based on having a short timeline, they decided to go the self-installation route. On Deck provided most of the materials needed to install the netting and turf as well as instructions and assistance to help with the installation process.

Rounding Out the Cages:

To complete getting their facility up and running, Edward purchased equipment from On Deck Sports including, pitching mounds, black batting mats, extra home plates, Bullet L-Screens, and tees. 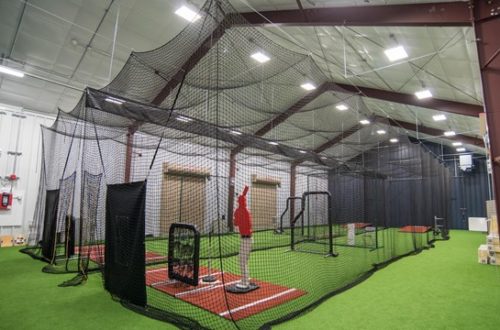